Well here we are… Polly is dry throughout the day and has been smashing it and I’m so so proud of her! I cant quite remember the exact day we started, but I do know it was the week after we arrived home from Disneyland (wasn’t going to attempt that away) so second week of May.

Don’t get me wrong this was the third time I’d tried her. The first was last summer just after her 2nd birthday but she kept hiding up and peeing in the corner and worse! She would only tell me oops rather than her needing to go etc and then it was too late. We were also selling our house at the time so I called it a day. We then made her sit on the potty before a shower or bath every night an she soon did it as habit every night but then we moved just before Christmas and we packed the potty and couldn’t find it for a while and the routine of that completely went out of the window etc.

I think I tried again February time but again she wasn’t quite ready etc and not even wanting to sit on the potty so I thought I cant force her etc. Then randomly one Wednesday we didn’t have swimming so I decided to start her.

I kept her nappy free for the first few days, we also stayed at home with no plans and put her potty in her playroom. I was told by other mummy friends to just watch her, the first little signs of her needing to go just guide her to the potty and if by magic that worked. I then praised her hugely an gave her a little chocolate button. This seemed to do the trick an then she started shouting “Mummy wee wee” followed shortly after by her singing she did a wee and a happy dance. She loved saying goodbye and flushing it away too. We did quickly move from chocolate to a sticker chart and then only chocolate buttons for no twos and now she has neither still just lots of praise though and its just a form of habit now.

At the end of that very first week after a few days nude, then a few days with knickers on and dresses. So lucky it was warm weather when we started etc. She was grasping it. We then had a wedding to attend that weekend so rather than worry about accidents I put her in Pull ups. (Which is what she still sleeps in at night and I had put her in those for long journeys in the car.) 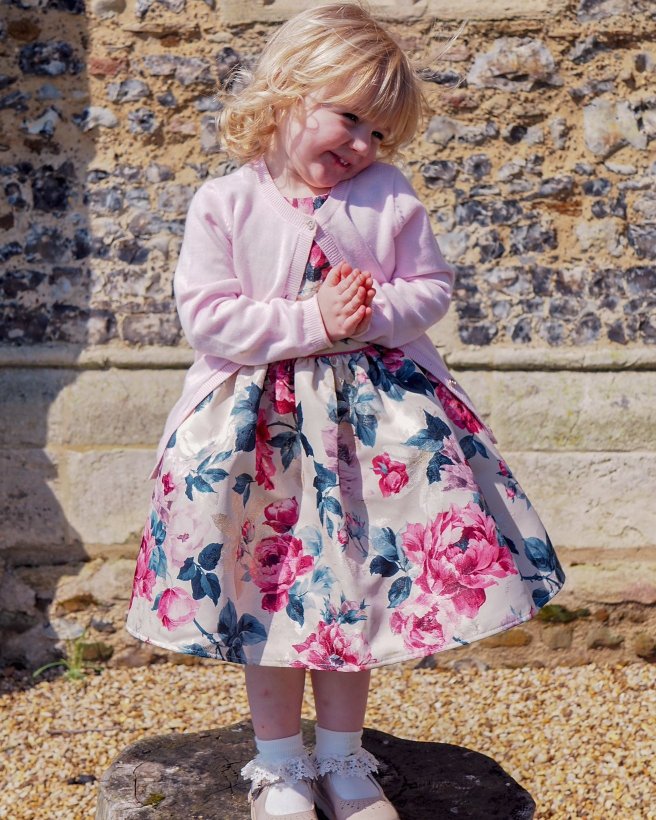 Again it was another beautiful day for the couple and it meant I could dress Polly in a pretty dress, frilly socks and shoes and not worry about her pulling trousers down in time. Of course it was a whole new place to explore and have fun with her little friends so she wasn’t telling me all the time she needed to go more so me still asking at this point. Her little friend Lucy was also Potty training so there’s us Mum’s Potty’s in toe heading to the toilets etc. Every time Lucy asked to go Polly wanted to go much to Lucy’s not wanting people in the toilet with her but Polly went most times even if it was a dribble. As the day went on mainly at the wedding breakfast meal she kept asking to go so me and Andrew followed it through. There was only one time she asked to go and had slightly gone alittle in her pull up so I was super proud of her being that we weren’t even a week in.

Of course she had fun and danced the night away in her normal tradition as she has always loved a boogie.

I then think one afternoon I took her to our local garden center on my own which is mainly outdoors and just took the potty. And actually she was fine in the car, asked for a wee there and fine in the car coming home. Its that first initial time of going out alone and thinking oh gosh what if!! A close friend of mine gave me some advise which I’ve stuck too and that’s to not ask them if they need the toilet before going out anywhere but to say lets go to the toilet before we leave and I think she has grasped onto how I say it meaning she needs to ideally go before we travel anywhere.

I mean don’t get me wrong I met a friend for lunch one Sunday and we had a carvery at her local pub which happen to have soft play in. So luckily Polly ate her dinner before knowing it was there but I took her to the toilet before she went into soft play and she didn’t go alot. She then had loads of fun playing away until she shouted from right the top… Wee Wee Mummy!! My face dropped as I rang into the maze of soft play jungle like ness to grab her in which it was too late. But after sorting her and deep cleaning the area it happened in the lady who run it said shes not the first and wont be the last.

I guess what I’m trying to get at is that it doesn’t matter how many books we read up on it and If so and so’s little one cracked it in a day, all our children are different and I always thought Polly would be dry night and day by now but she isn’t but that doesn’t matter shes on the right path and to be dry all day is amazing. We went to Butlins last weekend with some friends and she only had one accident after getting out of the pool which I Blame myself for because I didn’t think to ask her if she needed to go etc. Yet two of those mornings she woke up there her pull ups were dry. Swings and roundabouts I guess.

I’m not sure how long it will take her to become dry in the night, I heard some books say to wake them for the toilet but I personally don’t believe in that as shes always been a dream for sleeping through etc. I think I’ll just make sure she doesn’t drink too much before bed and that she sits on the toilet last thing before a story etc. Anyway I think as Mother’s your all learning all the time at each developmental stage your child goes through but I feel rather happy and of course proud of my little monkey and how well shes done in a few months. Plus it is lovely to not take a huge potty about with us, which we then converted to a fold away seat, but definitely most buys!

If your about to take on this challenge of Potty Training with your little one the best advance I can give you is to stay calm. The calmer I was with Polly the better she is and accidents will happen so be prepared with plenty of spare clothes. Good Luck and Thanks for reading.

Pinch punch first of the month and the last week of homeschooling Polly 🙌🏻
Goodbye February 👋🏻
Little Lola's face waking up this morning after hearing last nights news and sleeping through the night 🙌🏻🎉 (2nd night in her big girl cot)
Happy Saturday 😊
Today has mainly consisted of not taking my eyes off this little one for a second 🙈
Happy Valentine's day from my little love bugs ❤
Throwing it back two years to a little 2.5year old Polly 💕🎈🤍
"I love you as high as I can hop laughed little Nutbrown Hare" 🐇❤
7 months already 💗
My Snow Angels ❄😇❤
Loading Comments...
Comment
×
%d bloggers like this: