And just like that we have a Two year old! The quickest two years of my life by far! People always say how time flies when you have a little one but it really does! Even looking back to her last birthday when she wasn’t quite walking its amazing how much she has come along in this last year. We had planned her a garden party with all her little friends, being as we had a large garden and that this lovely heatwave was continuing into August. Her Birthday fell on a Saturday this year so we planned the party for the Sunday and her actual birthday we wanted to spend the majority of it just us enjoying her. So after we watched her open some presents we then set off for a yummy birthday breakfast. 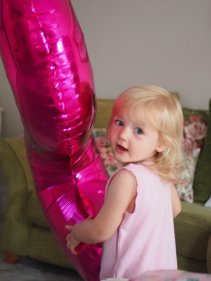 We went to her favourite restaurant and our local for a scrummy breakfast and as it was her birthday we treated her to a naughty strawberry milkshake which fueled her with plenty on sugar for lots of soft play fun.

We then went to our local soft play, which I thought for a weekend would be packed but as it was so hot outside it wasn’t too busy at all. Daddy had never been before so Polly enjoyed showing him how it was done and apart from him getting stuck half way down a curved slide he too had a blast! 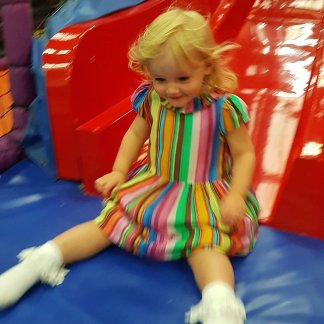 I haven’t got many pictures of this as I mainly did more videos of Polly charging about and zooming down the slides. Since I had last taken her I saw a huge difference. Shes a confident little cookie anyway so going around on her own wasn’t and issue but she knew the way to climb to get to the biggest slides and she could reach all the steps etc. Myself and Andrew could actually just sit there with a cuppa for a few moments and watch her go round and round!

We then came home and chilled before Polly had the longest nap ever and I had to wake her. We then popped to my parents with her newest little ride where we of course took that for a spin around the block and see some more family too! 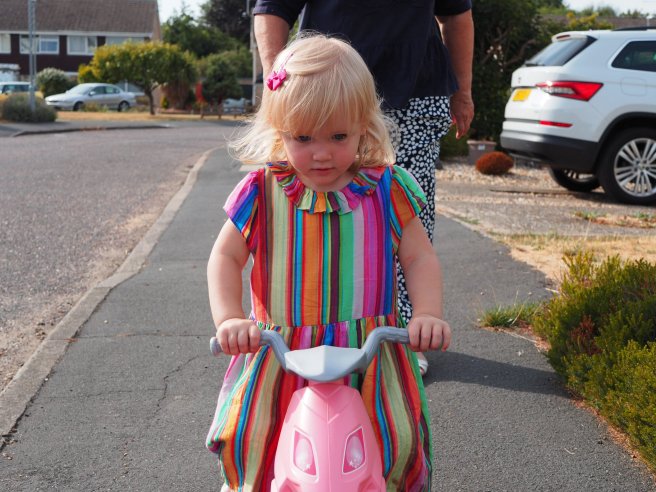 It felt strange putting a two year old to bed that night! Something about her just seemed that bit more grown up. But she went down like a light probably because she was so tired bless her. The next day (Sunday) was party day. We had hired “Soft Play 2 U” who we had last year for her party, this time we just ungraded the package by picking the older one for her age. I then also found via Instagram the lovely Amy of “Peanut Butter Jelly Essex” who has the most fab T-pees/ Bell tents and she was so accommodating considering how late I left it too organise one for. Now I know what your thinking, it’s a lot for a two year old’s party but I imagine us to have moved by her third birthday and with the hot weather period all over summer I wanted to make the most of the garden one more time! 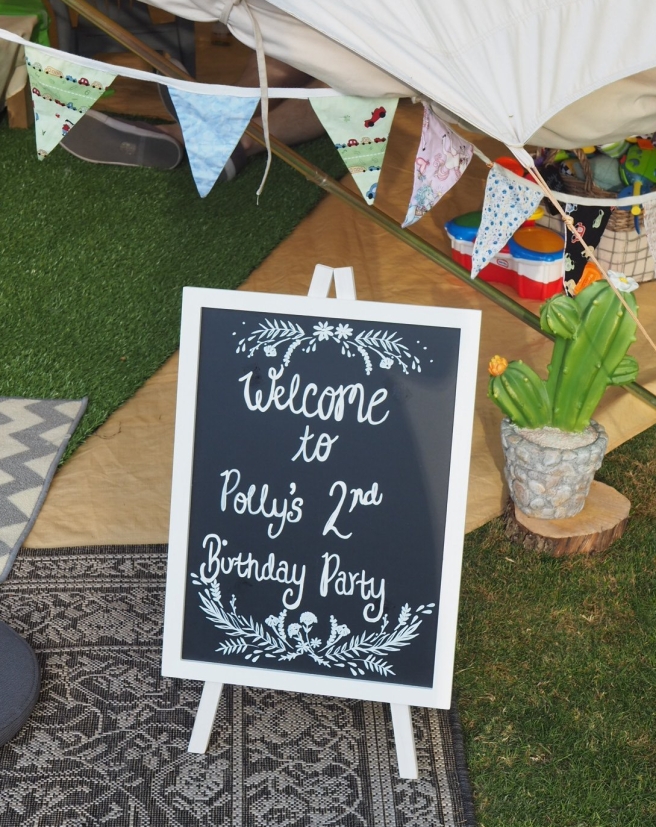 Soft Play were the first to arrive bright and early then followed by the bell tent as that takes a little while to set up. Inside it had some sofas and chairs, a little table with a colouring section. It was also full of toys too, plus a little table out the front of it with bubbles and puzzles for each of the children. Polly got her own little chair which she loved and set of fairy wings too!

We were super lucky with the weather as the sun shone for us but we set them the tent and soft play at the back of the garden so was shaded for the little ones. We borrowed all the bunting from our kind friends the Balding’s and the wooden logs from the newlyweds the Colling’s. It all helped add to the woodland/garden party theme. 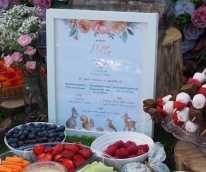 We then also hired the most beautiful flower wall from “The Backdrop Boutique” who we have used before when we had a wall for our wedding. She is such a lovely lady and so easy to deal with. It made for the perfect backdrop for the food table and then for pictures after too. Who doesn’t love a photo prop at a party 🙂 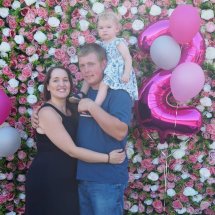 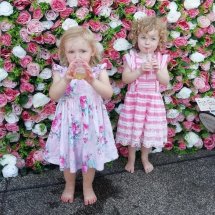 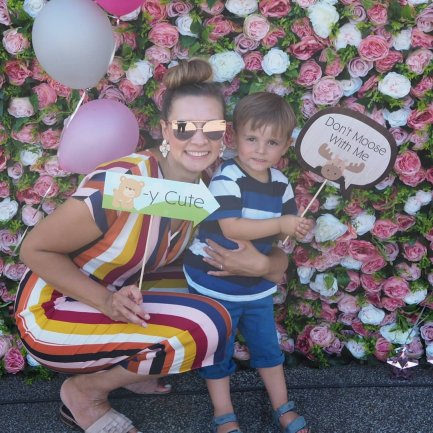 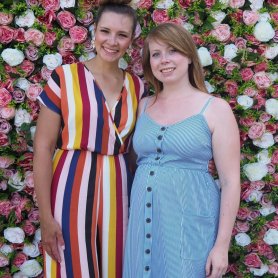 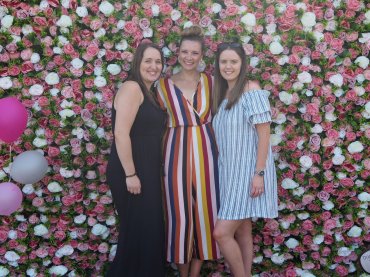 The flower wall was perfect as it covered both our garage doors and the sun wasn’t there come the afternoon so perfect place for it to be. We did just manage to get one picture of all the little ones and their Mummy’s together whilst they were eating of course.

I also did party bags which consisted of popcorn, sweets, a juice cup (mermaids or unicorns for the girl and monsters or dinosaurs fro the boys), the girls also got a little hair clip set. And they all got a woodland animal mask on the plate setting. 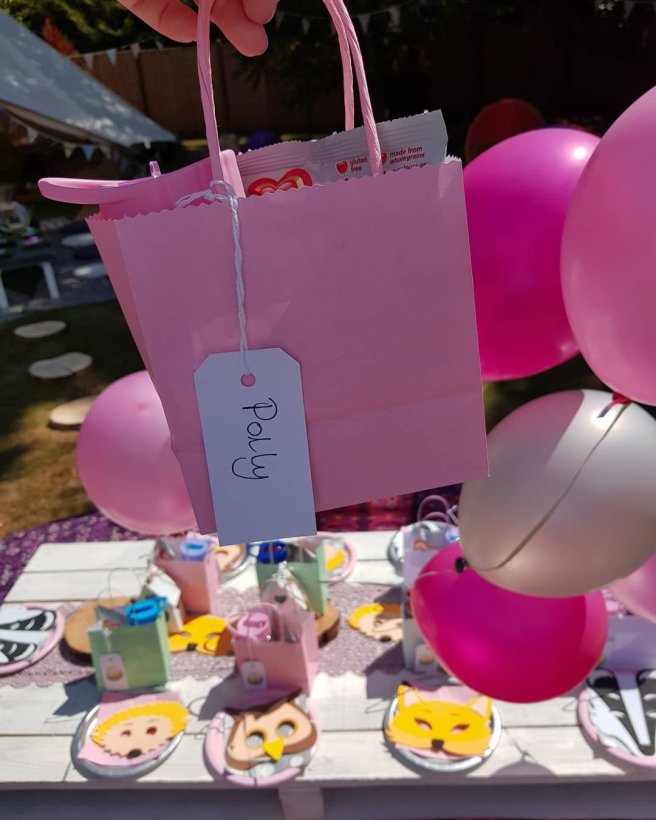 The little ones also had so much fun playing with everything they could get their hands on, including Polly’s little car from her 1st birthday which they all loved pushing each other about in. 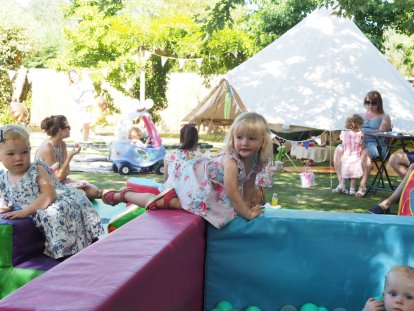 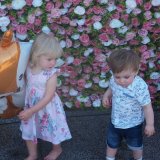 After we all munched on the food it was then time to do the cake. Luckily having a party a home stops you from forgetting things as last year I forgot napkins and candles!! Polly loved everyone singing Happy Birthday to her and I think she was was rather pleased with her cake too!

The cake itself was bottom tier Victoria Sponge with raspberry jam and vanilla buttercream and the top was Biscoff sponge with salted caramel buttercream which literally most of the adults all had at the party as I thought vanilla would suit the little ones better. 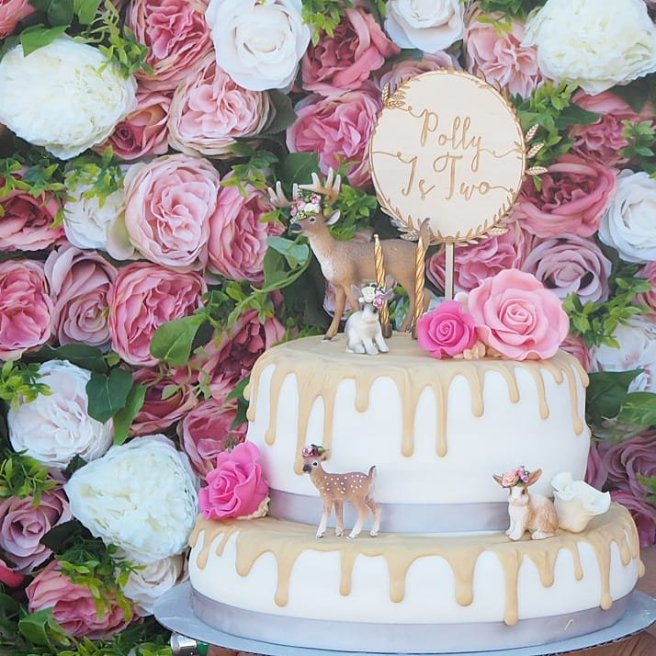 The little animals were from Instagram “Bows and Beaus” which all had little floral crowns on them, super cute and the wooden sign was from “Sophia Victoria Joy” also who I found via Instagram. All of which I can keep too and maybe Polly will play with the animals when shes a bit bigger and wont be so tempted to put them in her mouth etc! The hardest thing to get right on this cake was the drip, as the gold was a mission to get the right colour of and it was a lot more sparkly until I put it in the fridge but kind of had too in the heat! 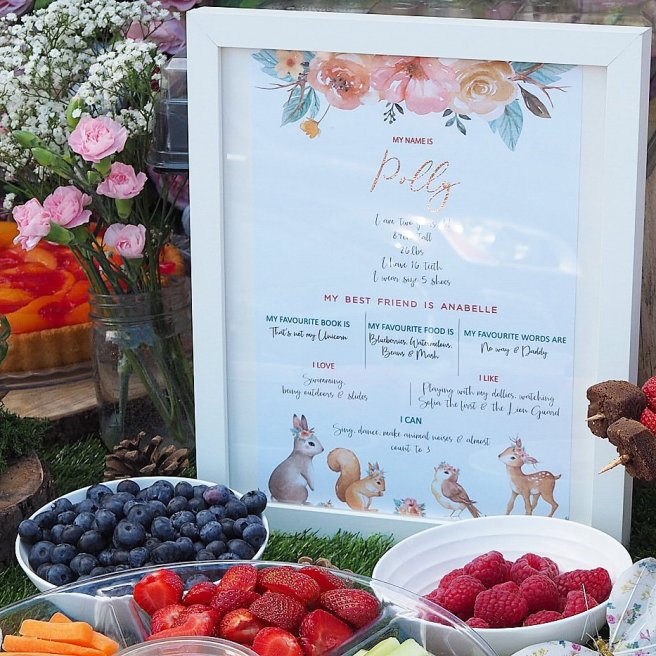 It was from the same lady who made her invites so matches perfectly and just says little details about her, weight, how many teeth she has at this age, shoe size, although she is now a 6. I just love little things like and its on her self in her room. Again found her on Instagram “When you wish upon a star”. Also on a keepsake note here is her birthday fingerprint tree that everyone did which is now hanging up in her playroom.

And lastly apart from Thanking everyone who came and spoilt Polly, I wanted to thank these lovely ladies below because without them the Party wouldn’t have been ready on time and things would not have looked as good as my pinterest board imagination without all their help.

So until next year, which know doubt will be a pepper pig themed birthday! No seriously though, people laugh and joke that I know how to throw a party so I’m glad everyone enjoyed themselves especially our Polly as after all its all about seeing her little face light up that makes everything worth it.