I can’t believe I have a 5 week old baby. (Actually now 8 weeks, taken me a while to finish this) They say that the newborn phase only lasts 4 weeks and I already feel she is past that now and is an actual baby who is growing before my eyes! I wanted to write this down before I forgot and it becomes a distant memory….I arrived at hospital on Wednesday the 8th July about 12pm. My Mum had Polly and this time Andrew was aloud in with me because I was being induced. We found the labour ward and were directed into our very own room in which we could take our face masks off. The midwife said they were rather busy with alot of women in labour so they weren’t going to remove my rods and break my waters until abit later on. So we got comfy and had some snacks and cuppa teas to see us through for a while. 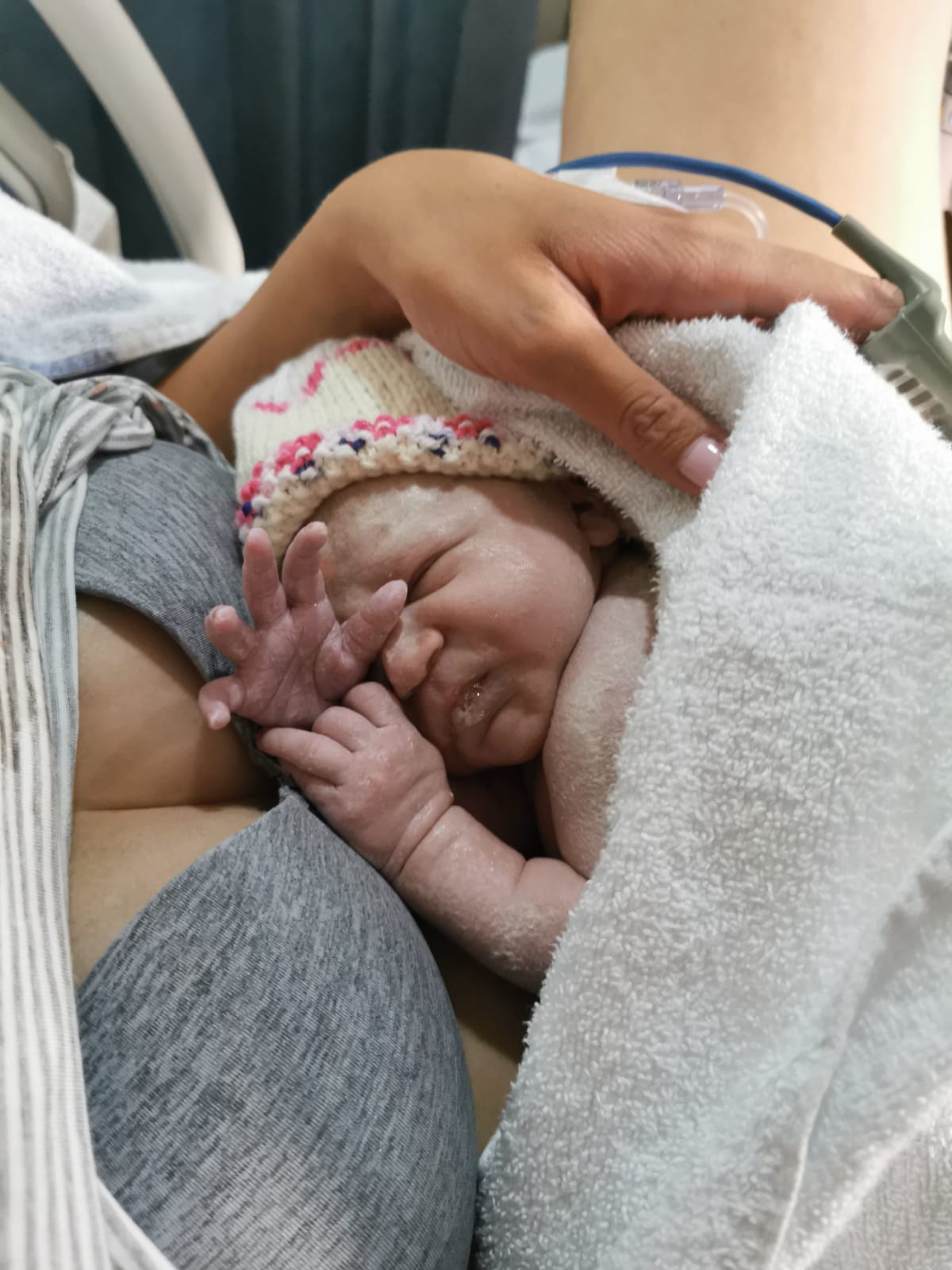 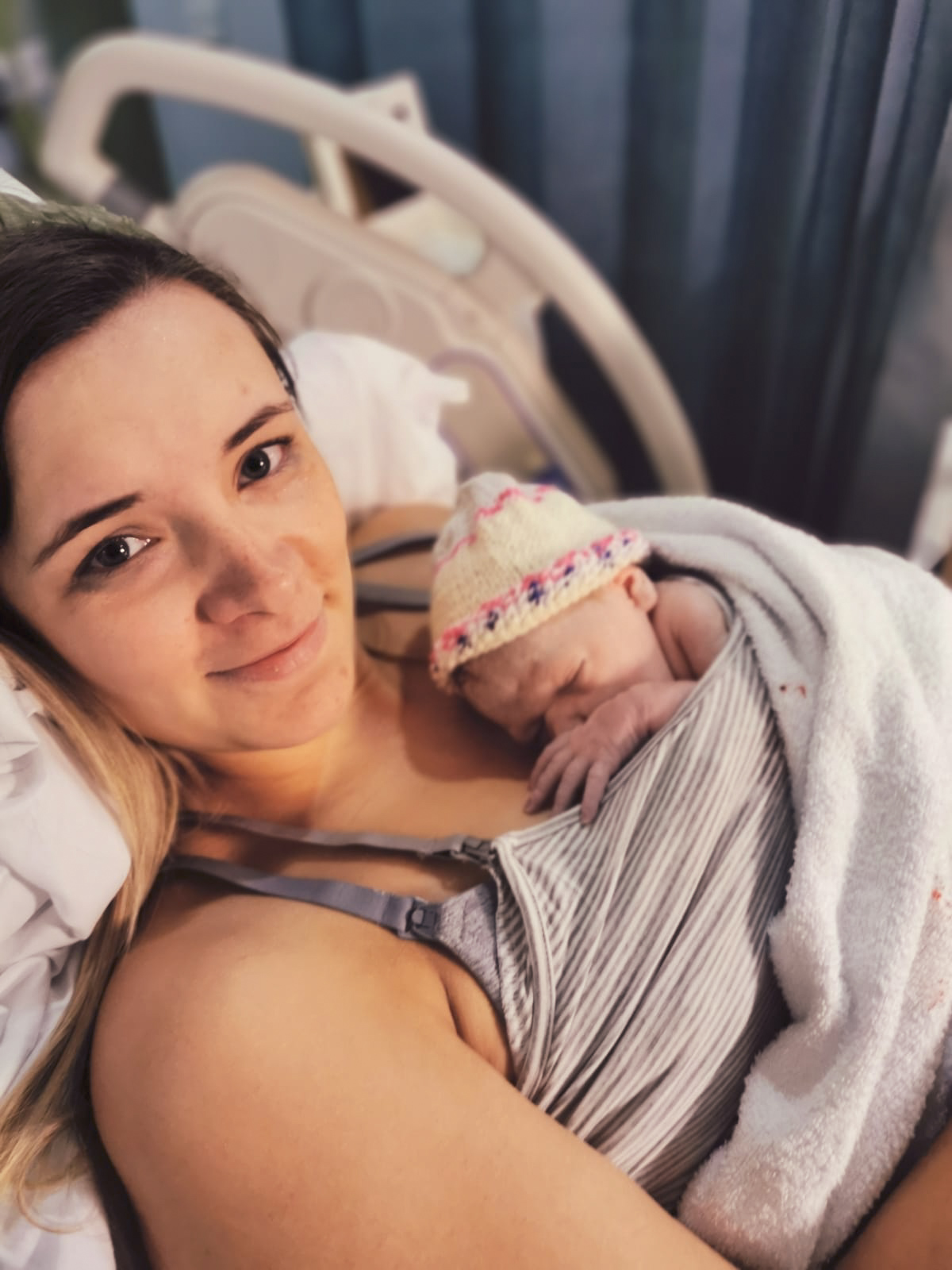 That feeling of having your newborn baby placed on your chest is just amazing. Knowing you made that little person, carried them for 9 months and then brought them safely into the world is just the best feeling.I didn’t get to have skin to skin for very long because I suddenly didn’t feel great. As the midwife was gently helping my placenta out my whole stomach contracted and my placenta literally flew out and covered the poor midwife! We literally had a laugh about it for a few moments because it was so embarrassing that I’d covered her in all my blood etc. But then just after that I suddenly felt sick, as the younger midwife said about getting me an anti sickness injection I told her I needed a sick bowl and need it now. Andrew quickly took Lola from me I sat upright on the bed and then was horrendously sick and whilst being sick I bled lots and lots from down below. Clots were just coming away and they couldn’t mop up the floor quick enough. Look away now if you squeamish….

Thank goodness the midwife was wearing a mask as it was literally in her hair and everywhere! They managed to move me onto a wheelchair and moved me into another room to concentrate on me as there was literally blood even up the walls.It got abit scary at the point and abit of a blur. I was moved onto a bed, and an anaesthetist quickly connected me to fluids, a gyne Dr checked my tummy and helped remove more clots and any remaining after birth. They had originally thought my placenta burst so needed to check nothing was left behind. I then had a catheter placed in me and as all these people were rushing around me jabing me from every angle I remember looking over at Andrew cuddling our brand new baby welling up because for men to watch their partner in pain of labour and after births I guess just feel so helpless and after when everythings settled down he said he thought the worst was happening to me.

Once things calmed down and I started to perk up abit I could see Andrew help the young midwife get Lola cleaned and dressed. We all know that first poop is horrible. They dressed her in the smallest vest and babygrow I had packed and I was finally able to have a proper cuddle with my baby. Due to everything that had gone on with me I hadn’t had chance to feed her and they had tried her on a bottle with no joy, then like mother nature intended she started to search for me and had her first feed. In that moment I felt complete. It had sunk in what I’d just gone through and there was this tiny precious little thing in my arms. I was finally a mother of two.

I already look back and can see how much she has changed in just two short months. She was still unnamed whilst in hospital as alot else went on and I think because I had my boys names in my head we had to be sure she looked and felt like a Lola.

I’m gutted there aren’t any pictures of the three of us but we didn’t think this time and once things calmed down and settled we actually all slept. Andrew then left and I was kept on labour ward until about 4.30pm/5pm. I could not fault the level of care I received here. All the midwifes were amazing especially the two who delivered Lola. I even got to see the midwife who delivered Polly. She infact was in charge of me post delivery so that was nice to have a familiar face etc. As Lola was born early and weighed less than they expected she had to have a couple of blood sugar tests which were heel prick blood tests which wasn’t nice for her but had to be done. She was doing well. I then had my catheter removed and had to do some samples etc. It felt good to slowly walk around brush my teeth and change etc, especially having an ensuite etc.

The care on the other ward was not so good. I had one final blood pressure check etc and then was told I could go home after Lola’s hearing test and physical checks were done. I got told this every hour…. Eventually after turning down dinner at 6pm, not having a shower and getting into pjs and sleeping whilst Lola slept because I thought I was going I discharged myself about midnight. I wouldn’t recommend this, especially if your a first time mum but there was barely any care on the ward at this point that I just wanted to get myself and my newborn home to my husband and daughter who as you can imagine was so excited to meet her little sister.

It still took them an hour to discharge me paperwork wise etc. I’m not sure if they were short staffed or if it was due to Covid19 etc. Because with Polly, Andrew was aloud to stay on this ward with me unlike Lola. he had already come back to the hospital once to pick me up but paperwork hadn’t been done etc. Anyway I’m not going to let that effect my birth which still was a shocker and one to remember but I got the best gift of all… Another beautiful daughter.

Anyway I hope to share what life is like with a new baby and what we get up to. I know I didn’t start this blog until Polly’s first Christmas so she was already about 4/5 months old but hopefully I can jot down some adventures on here etc although having two children does take up alot more of my time, it’s still the best job ever and I feel truly blessed.